The heavens belong to our God; they are His alone, but he has given us the earth and put us in charge.
(Psalm 115:16 The Passion Translation)

I have set before you life and death, blessings and curses. Now choose life, so that you and your children may live (Deut 30:19 NIV)

How amazing that the Lord has given mankind the earth, delegating His authority to such a degree that what happens on earth is determined by us.  We have the power to determine whether we rule on the earth, personally and corporately, by choosing what will bring life and blessing or, shockingly, what would bring death.

It is unimaginable that any sane person would choose something other than life and blessing, but clearly that was not the case from the very beginning. The Fall came in the midst of glorious unbroken communion with God, prosperity, fruitfulness and abundance.

“Every time you make a choice you are turning the central part of you, the part of you that chooses, into something a little different from what it was before…you are slowly turning this central thing either into a heavenly creature or a hellish creature.”

It seems the very essence of the truth in Psalm 115 that the Lord God has given us the earth and put us in charge, is the very downfall of mankind throughout the ages.  The absolute freedom and power to choose is in our hands.   The choice of life and blessing is to choose to obey God and live subject to Him. Obedience and submission to God do not constrain us but release us to be all we are called to be and to govern life on earth in true authority.

But there is always the whisper of the Fall tempting us to believe that our way is the right way and that God is standing in the way of our freedom.

We worship God by our response to choices.  Every day we are choosing life or death, blessing or cursing.  We choose Him and we live in the joy of freedom. As we worship so we are drawn into Him, making Him our focus rather than ourselves.  We are, consciously or subconsciously, laying down our wills as we worship.  Worship is an amazing thing for God’s children. We might think that it is all about telling God how wonderful He is.  Yes that is our part.  But we get so much more from God as we worship. We come into His presence and in His presence there is fulness of joy.  There is no fear, shame or confusion for God’s children in their Father God’s presence.  He promises to never leave or forsake us, so He is always present to us. But we are not always present to Him.  Our minds and hearts are full of other things. But worship puts those things to one side and makes God our focus.

As His precious children when we worship we SHINE out to Him and also to everything around us.

Today, the Lord God wants to set us free from things that are in the way of our shining.  He wants to show us His perfect plan which was always to restore us to perfect relationship with Him.

I lived my life in fear and shame that I would be ‘found out’, not be acceptable, never be good enough, never belong, ‘expect nothing and you will never be disappointed’, etc.  I tried hard to please God but never felt I was worthy of Him.  Was the problem with God? No.  It was the way I had created systems in my life to self-protect and God loved me too much to leave me in that state.

BUT –  God, the Word, made His will and mankind’s choice to obey right at the start and the heart of Creation,  evidenced by the Two Trees in the Garden.  One was the Tree of Life and one was of Knowledge.  What would you rather have Life or Knowledge?  Adam and Eve could choose to live in obedience and have life or choose their own way and eat what was forbidden.

Adam and Eve were meant to rule over all the earth, under the protection of God the Father/Creator/Spirit, and they were meant to get their understanding of how to do that from the Creator God Himself.  God wasn’t holding out on them by not letting them ‘eat’ of the tree of good and evil.  He wanted them to keep in relationship with Him.  That tree was about knowledge of sin in the context of goodness. It represented the fallenness of created beings but was never meant for mankind. Why?  Because it was not good.  That tree didn’t represent life, it represented knowledge of what was good and not good ON THE EARTH. EVIL was already on the earth before mankind was created.

We are not meant to live our life on earth based on what is happening around us but from the source of life, higher, eternal life IN CHRIST. Our purpose on earth is to live under and out of that authority as we live our lives on earth.

Jesus didn’t live His life based on what He knew was happening on the earth good or otherwise, He lived according to what He saw His Father doing.  (John 5:19)

So what happened when Adam and Eve disobeyed God and ate from the tree of knowledge?  They immediately chose to be separate from God and do their own thing, allowing the enemy to plant unbelief in their hearts through listening to the enemy’s taunting of ‘Did God really say?’  The enemy hates our relationship with God.  His main tactic is to suggest something other than what God says, which is a lie.

The choices from the Fall were choices to be separate from God and resulted in Adam and Eve seeing themselves very differently, with eyes opened by knowledge which was limited to the earth. Earthly knowledge.  Up to that point they had unbroken communication, relationship and wisdom from God Himself, from talking with Him.  He was the Life source for them and the source of knowledge from His eternal, heavenly, divine, perfect perspective.  His ways, His thoughts, His will was revealed and they lived under divine government, which was unfolding and increasing – Isaiah 9 – the increase of His government and the increase of His peace never ending. Wow.  Mankind was living in and under that authority and government, having a part to play in ruling the earth on behalf of God.  That was the original plan and it is still the purpose of God, but even better for we are now indwelt, Christ in living in us, the wisdom and knowledge we need is revealed to us by Christ’s Spirit, the Spirit of Truth.

When Adam and Eve made their choices nothing had changed on God’s part. He was still the loving Father.  But they had separated themselves from Him by choosing a different way. We were never meant to live separate from God. There is no life in separation from Him.

Separate from God they saw themselves naked and were ashamed. As a result they hid from the presence of God.  They no longer knew who they were and looked at each other through fallen eyes, no more glory.

When we are separate from God we do not know ourselves, so we try our best to be the person we think we should be, trying to live a life outside of God, making a wardrobe full of fig leaves!

Without God we live in various manifestations of a contrived identity, in shame, fear or a need to control.  It may be through ambition, creating an external image, striving to present a person to the world that we think is acceptable, justifying our existence.

Shame is a powerful force. It is different to guilt, which is about what I have done wrong. Shame says there is something inherently wrong about me, that I am the problem.  Guilt is about something I have done and is easily confessed and repented..

Shame then leads to fear of others finding out what we see is wrong about us.  We find ways of covering up (fig leaves), being defensive, rejecting before we are rejected, putting on a front, being successful or prosperous.  All these things can be ways of presenting an image to the world that we are OK, even though we don’t feel like it. No-one must find out what I am really like so I will be whatever you want me to be, or determination never to open up to others about our weaknesses: to be strong, brave or, conversely, consider ourselves so unimportant we won’t share our pain with anyone else because we are not worthy of their attention.

God’s plan is for us to have a true knowledge of how He sees us, to then return to Him through His Son and back to the relationship we were always meant to have. That is why Jesus came to earth – to bring sons and daughters back to the glory of unbroken relationship with God, as it was in the beginning.

We are not meant to be defined by how we see ourselves but by who He says we are.

We need to eat from the tree of life.

When we eat from the tree of Life, in other words living in relationship with God the Father, not separate any more, having direct access into His presence, we are One with Him. His Spirit is in us and we have everything we need.

So what can we do about our shame?  Be honest before the Lord, pouring out our hearts about how we saw ourselves, to sit in His presence, to listen to His voice.

We can also allow other people to minister to us, holding us up, leading us back to the Cross and the presence of God through their prayers and wise counsel.

David encouraged himself in the Lord and we can encourage ourselves by feeding on the word:

Isaiah 41 – I am engraved on the palms of His hands

Matthew 10: he knows every hair on my head

Ephesians 1 –  He adopted me and chose me  in Him before the foundation of the world, that I should be holy and without blame before Him in love

Romans 8 – Nothing can separate me from Him

Phil 2   I have the mind of Christ

Phil 4- I have the peace of God

It is not good for us to be alone.  We need to be in community with others who can minister to us, build us up and encourage us. In other words, be church to one another.

Are you struggling with shame, fear or control issues?  Are you confused?  Seek out others who can stand in the gap for you.  God is faithful and He will have people prepared for you if you are willing to be honest and seek their help.  He provides people who can build you up and enable you to choose the life and blessing He has for you.

Lord I thank you that you have made me in your image, not the image I created in my mind, seeing myself as less than who I am in You.

Lord I forgive those who have contributed to the way I see myself as less than you say I am. (If you can, say their names and specifically forgive them one by one.)

Please forgive me for not believing who you say I am and believing the enemy’s lies.

As you have forgiven me, I now choose to forgive myself for any way I have lived in false identity.

Thank you Jesus that I am forgiven and free to be who you made me to be, free in Christ. 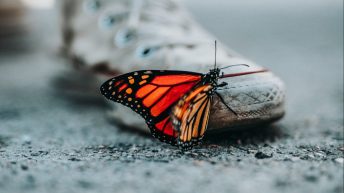 From Glory To Glory